I thought I was putting on weight because I’d hit 30, says Rich

Rich Pleeth was only 33 when he was diagnosed with bowel cancer. Doctors removed a tumour the size of a large grapefruit and now he continues to live life to the fullest. Here is his story.

“I was feeling really tired and began getting very hot and having hot flushes, especially when moving from outside to inside or getting on the Tube.

I thought maybe I’d just been drinking too much and was putting on weight because I’d hit 30 – perhaps it was a sign of old age. My luckily fast metabolism was slowing down. Time to hit the gym more?

What made me go to the doctor was when I noticed some mucus in my stool – I thought I might have had food poisoning which I had had in the past when returning from India with the notorious Delhi Belly.”

“It never occurred to me that it might be cancer – there was no history of any type of cancer in my family, and no bowel disease. I am fairly young, and I wasn’t in any discomfort or pain.”

“I went to my GP and suggested I needed antibiotics for food poisoning. The GP suggested a stool sample and two days later I got a text saying there was nothing to worry about.

A month later I was on holiday in Cornwall when I got a call (on speaker in the car) saying that doctors wanted to carry out some exploratory work. They said it wasn’t urgent, so I didn’t rush home to London.

But three weeks later there came another phone call – this time I was told I needed to come back to London immediately to have a colonoscopy. It was the bank holiday weekend and I was in Italy for my house mate’s wedding. I chose to stay for the wedding, telling only the person I was with when I received the call.

I arrived back in London and immediately made my way to University College London Hospital for a colonoscopy on a Tuesday morning in early September 2018.

The consultant assured me there was nothing to worry about and it was most likely that he’d remove a couple of polyps.”

“Unfortunately during the colonoscopy there was an ‘Oh . . .’ from the consultant.  ‘Oh doesn’t sound good,’ I said. He’d found a tumour. He said they thought it was probably cancerous but wouldn’t know for sure until they’d done a biopsy.”

“I told my family who rushed to London to be with me. My girlfriend Samantha flew back from Barbados where she was visiting her family. We all planned for the worst but hoped for the best.

Everything moved very quickly after that. I had a CT scan, an MRI scan and lots more tests.

Our worst suspicions were realised when it was confirmed to be cancerous.

Within two weeks, I was prepped for surgery. I kissed Samantha and was off for a lifesaving operation. On the way to the waiting area, Samantha saw the surgeon and squeezed his hand hard telling him ‘Good luck’.

Samantha and my father sat in the waiting area, chatting and worrying, expecting there to be news in four hours (the predicted duration of the surgery). My mum arrived from babysitting my nieces but there was still no news. Anxiety levels rose.”

“In total the operation lasted eight hours as the surgeon and nurses performed major surgery on my lower bowel and removed a tumour the size of a grapefruit along with 20 cms of my bowel and 42 lymph nodes.”

“I awoke with two pairs of eyes staring down at me: it was my parents. Then Samantha’s beautiful head popped up and smiled.

I was moved to a ward and recovered well over five days when I was allowed to go home. I rested a lot but was getting stronger every day. We were all waiting for the call to find out if the cancer had spread.

Unfortunately, the news came that the cancer had spread to nine of the 42 lymph nodes which put me in the highest risk category and I therefore needed nine cycles of chemotherapy.

I started chemotherapy three weeks later in October 2018 and finished in May 2019. They were three-week cycles and I have to say I felt awful the first two weeks while taking the drugs and IV. Then the third week I’d feel considerably better.

I was determined to continue working to keep my mind busy (but everyone takes a different approach so never feel bad – just do what you want).

I could go on forever about chemotherapy but let’s just leave it by saying that it is incredibly unpleasant and I am always thinking of the individuals going through chemotherapy and hope that they react better than I did.

Throughout my illness, Samantha was incredible. She came to every appointment and every chemo session with me. Without her I would never have got through. She was a constant support and I know it took a great toll on her (she jokes she aged 10 years). 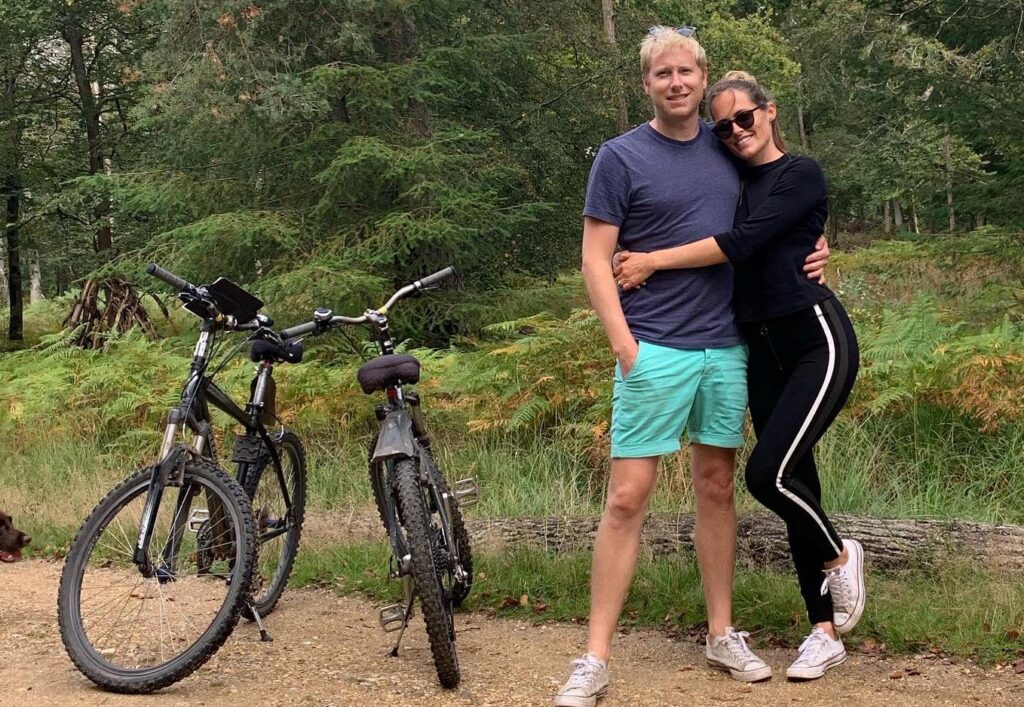 My parents were brilliant as well – they travelled up and down from Cornwall to be with me if Samantha couldn’t be there or had to be out.

In May 2019 we got the call from the wonderful colorectal nurse confirming that I was clear of cancer. The news was overwhelming. Thankfully, I’m now clear and in remission.

The NHS was fantastic throughout: the nurses, doctors, consultants and oncologists are the unsung heroes of this story and will be tested even more during the coming months with COVID-19.

As for me, well, I need regular blood tests, CT and MRI scans and an annual colonoscopy but other than that I feel amazing. I’m still very tired and have no feeling in my toes or fingers where the chemotherapy drugs attacked the nerve endings.

I have to be honest, I am concerned that the cancer might come back but that’s something I have to live with – and I’m planning on living life to the full as I always have.

Samantha and I are now much more conscious about what we eat – we’ve cut out bacon, nitrates and a lot of meat.

We are just as committed and even more determined to have fun and to take advantage of every opportunity.

I realised I’d probably spent too much time in the office so I gave up my job and went freelance so we could go travelling more and be there for each other. I’ve also been lucky enough to join the Fundraising Board of Bowel Research UK.

I am hugely grateful to the NHS who were fantastic throughout, particularly the nurses at the Macmillan Centre, the colorectal team at UCLH, Vicky and Chris. At the start I was quite nonchalant but they kept ploughing on with the tests until they discovered what was wrong with me.

Now I do like to talk about poop to my friends to make sure they are aware of the symptoms of bowel cancer and get themselves checked.

Generally as with all people they are very nonchalant about it but I now want to ensure that no one dies of embarrassment, so let’s talk about poop. Feel free to tweet me @richpleeth.

People shouldn’t ignore the symptoms: stomach cramps, change in bowel habits and blood in your stools.

My advice is simple: if you think that something is wrong, go to your GP and get checked. Please don’t die of embarrassment.

PS: Don’t feel too sorry for Samantha, she got her new best friend Winston (a sprocker spaniel puppy) two weeks after my surgery.”