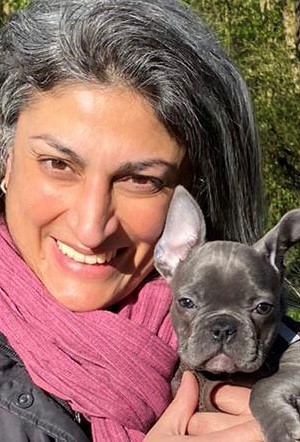 I had the APPEAR procedure under Professor Williams in 2003. I was 29 when I was diagnosed with stage 3 colorectal cancer. I believe I was one of the first to undergo this op… a guinea pig so to speak. I had a stoma for a year and then it was reversed in 2004, after 6 months of chemo.

Looking back now, I did have symptoms:   I was really tired all the time – I would just fall asleep anywhere if I sat down for more than 20 minutes. At that time, working as a merchandiser for a high street retailer – it was really tough going.  But everyone always moans about being tired and needing a holiday, so I thought I was no different, just less able to cope.  I was prescribed anti-depressants and sleeping pills on and off for about 3 years prior to my diagnosis.  It all makes perfect sense now – so many people I have spoken to since say the same – cancer misdiagnosed as depression!

In July 2003 I got married in Germany. Again I struggled, but this time put it down to stress and nerves. We went to Florida for a short holiday as we planned to go on our honeymoon to Thailand that Christmas.  It was in the USA when I went to the loo and saw the drop of blood on the tissue.  I was worried, but there was no more blood so I just got on with things.

When I came back to the UK I went to see my GP about the blood, although it had happened just the once – and on examination he felt a ‘polyp’.  He suggested I see a consultant.  A few weeks later I did – again they kept calling it a ‘polyp’ and said they would put me down for a colonoscopy and they would ‘snip it off’.  My NHS appointment for the colonoscopy came through for 11 weeks time.  It was early October 2003.

I had started a new job on 1st Sept as a Logistics Analyst for a leading high street retailer.  6 weeks into my job, I broke down at work as I was so worried about the lump.  My manager was fantastic and helped me arrange for private medial insurance through work, so I could see a consultant immediately.

I saw a private consultant, had a biopsy and was diagnosed with Rectal Cancer on the 5th November.

Then came the scans and the ‘had it spread’ consultation.  Luckily, it was confined to the rectum, but the problem was the positioning of it.  The tumour was so near the sphincter that the consultant said I had no choice but to have my whole colon & rectum removed and have a permanent colostomy.  At this stage I just wanted to have the cancer removed and did not care about how it would be done, or the effects of the surgery.

I am so thankful that I decided to speak to a vascular surgeon friend of mine, who stressed the importance of quality of life after the surgery, especially as I was only 29.  He informed me of the things to look out for when searching for a surgeon, and suggested that I found a Professorial Unit at a teaching hospital.

He was confident that there would be options for me and presented me with a medical paper “Options for sphincter preservation in surgery for low rectal cancer”  This made me realise the full implications of the surgery I was about to undergo and I started my search.

When I found Prof Williams I can honestly say that it was one of the turning points in my life.  My husband, Christian, and I went along to the consultation and immediately liked him.  He was very concerned that I was so young and that he had to consider the possibility of me wanting children in the future.  After some more scans, he met with other specialists and was able to give us our options.  He even called me at home the night before my surgery to tell me he had an idea which he would like to try if I would agree.  By this stage I had put all my faith in him, and knew he was ‘fighting my corner’. The consent forms that I was required to sign before my surgery covered all eventualities.  I signed everything and asked Prof to do what he had to to save me. I would not know what surgery Prof would perform until I woke up.  One thing for certain was that I would have a ‘bag’ – either permanent colostomy or a temporary ileostomy.  The latter would mean that Prof had performed the sphincter saving surgery he was planning on.

I woke up with an ileostomy (from my small intestine) which would be reversed once the surgery site healed.

At this point we were quite certain that the tumour had not broken through the bowel wall and that the chance of spread to the lymph nodes was unlikely.  So, when pathology revealed that 1 out of 13 nodes was positive I was broken.  Prof came to see me on a Sunday and told me that there was tumour in the lymph nodes and I cried uncontrollably as I recalled the survival statistics.  This brought me from a stage I/II to a III.  I would have to have chemotherapy.  The tumour was 2.5 cm and my staging was T2N1M0.

On January 14th 2004 I started chemotherapy. I did not lose my hair, and did not appear that sick to look at. I felt absolutely awful though; sore mouth, sore hands and all the other nasty side effects of chemotherapy… After it finished in July, I had tests to see if I would be continent and if the pouch would be functional.

In October 2004 I had my ileostomy reversal.

I saw the Prof every six months for my follow up checks, ultrasound scans, CT scans and colonoscopies, and I have now reached 4 year NED (No Evidence of Disease).  I have managed to wean myself off of daily doses of laxatives, and now have a ‘more or less’ normal function.  It is painful sometimes, and other times I am constipated, but generally speaking I am leading a normal life.  I have an excellent quality of life and all the effects of the surgery are manageable.

We had to wait 1 year after chemotherapy before I could get pregnant.  I was monitored closely during pregnancy and I’m glad to say I did not ‘fall apart at the seams’! Prof always told me I would not be able to delivery naturally as the potential risk to me was very high so, when my waters broke nearly 4 weeks early and I went into labour I was really scared.

My son, Dylan was born on 4 July 2006 by emergency C-Section with no complications, followed by my daughter Natasha in February 2010.

I am thankful to all my medical team, especially Professor Williams, for saving my life and enabling me to enjoy an excellent quality of life.