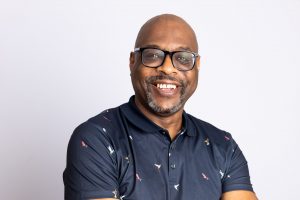 Eric Douglin is joining Sam Rose and Nigel Horwood as a new regular blogger for Bowel Research UK and we will soon be hosting his first blogs. He lives in Bromley in Kent and works full time for Direct Line, the insurance company and had already had a kidney transplant over a decade before receiving bowel surgery.

In 2021, following severe abdominal pain over the Christmas and New Year period, Eric ended up in Accident and Emergency in hospital where he was diagnosed with diverticulitis and had such severe inflammation that it had led to life-threatening sepsis. The sepsis meant Eric needed immediate emergency bowel surgery but when he woke up from the operation it was with a stoma, something he had no time to mentally prepare for.

Why did you decide to support our #HaveYouGotThe Guts and #auguts campaigns?

I take the view that anything that raises awareness of bowel disease and living with a stoma is a good thing. I know most people don’t like talking about their bowels or stomas, but when we do, we help normalise it, and this helps give a voice to people who normally find it difficult to talk about these things.

When and why did you decide to be active in encouraging black people to talk about their bowel health?

After I started to recover from my bowel surgery and stoma, I decided that I needed to be visible and to put myself out there so that people, including people from black and ethnic minority backgrounds, would feel more comfortable chatting to me about their experience.

Without putting everyone in the same category, I know that many people in the black community like to be private about our health and we don’t discuss our ailments outside of our close circles of family and friends.  But I believe people benefit when we talk openly about our bowels and not bottle things up, so I share my experiences in the hope it will encourage others in my community to do the same. It’s not for everyone but I have had a really positive response.

What extra challenges do you face from having a stoma and a kidney transplant?

Initially when I first had my kidney transplant and my stoma, a lot of people take these to be complete cures, which neither is. They are treatments not cures, my transplant won’t last forever, and neither will my stoma.

Having a stoma is an invisible disability and people can’t see that I have one which can make it uncomfortable when I’m using a disabled toilet because it doesn’t show. I use disabled toilets because I need the extra room when I’m changing my bag.

What sort of changes have you made to your work life living with a stoma and how flexible has your firm been?

My firm has been great, very flexible. My boss encouraged me to take all the time I needed to get better after the surgery and I was no under no pressure to return quickly. I am also able to decide when to make my own doctor’s appointments and I am never expected to make up the time if these are during work hours.

Since Covid, I became very used to working from home and found that it really suits me. That said, if I was working back in the office, it would bother me more than it would my colleagues. I make some small allowance for my stoma, for example, during Teams meetings I tend to not have the camera switched on because I need to adjust my bag every now and then because it’s uncomfortable and I prefer colleagues not to see me doing it.

All of my immediate team know I have a stoma, as indeed do many in my firm because I decided to share my story on the company intranet. This got a lot of positive reaction, and I found colleagues who were in the same shoes who have stomas or are living with inflammatory bowel diseases like ulcerative colitis or Crohn’s.

What was great was that they too were happy to share their stories and we all received a lot of positive emails and comments, which shows the benefits of telling others. It made me recognise that often we simply have no idea what others are going through and how sharing our stories is such a beneficial thing to do.

You will be able to have an operation to reverse your stoma. Is this going to be a difficult decision?  What are the things you are weighing up before you decide?

One of my biggest concerns is going through major surgery again. Because I had to have my original bowel surgery during a medical emergency, I think I still have some residual PTSD about it, which causes anxiety.

There’s also about a 1 in 5 chance of the surgery not succeeding because I am on immunosuppressants permanently to stop my body rejecting my donor kidney. If I have the operation and it fails, I’ll be back to square one and need more surgery to reinstate the stoma. It’s a big decision.

What professional medical advice have you taken about it?

I saw my consultant who gave me all the pros and cons. He was blunt and told me that the decision was entirely mine because it’s not something someone can take for you. The bowel removal surgery was lifesaving and this isn’t lifesaving – it’s just surgery.  It’s a more a lifestyle decision. That said, I am under no pressure to decide right now. Or if I do decide to go ahead with the surgery, I’m completely free to change my mind and cancel it. Right now, I think I may well go ahead with the reversal but I am not 100% sure quite yet.

You’ve previously been into basketball. Since having a stoma, what’s your exercise regime and can you stay as fit as you used to be?

I take walks as my main form of exercise these days. I admit that I am not as fit as used to be and I have stopped playing basketball because I was a bit concerned about getting a hernia, which is possible with a stoma.

While I try and walk most days, I should probably increase the amount I do because it’s healthy to be active. When I worked in the office I walked more just getting to and from work.